For our last full day in Paris, I decided to go on another touristy adventure despite the fact my feet are definitely starting to hurt from all the walking. My friend was going to Versailles palace with her parents, so they adopted me for the day.

We were getting an early start and aiming to leave at 9:30, and my other friend told me I absolutely had to try Eric Kayser bakery. There are several locations in Paris, and I went to the one near the Opéra metro station.

First, this is the view when you exit the metro.  Paris knows how to do mornings right.

I was pressed for time so I just grabbed one pastry and a cappuccino. They are known for their financiers, which are similar to madeleines; they’ve got a soft, poundcakey texture with a nice bit of crunch on the outside. I grabbed a pistachio financier, and immediately messaged my friend that she was right. The financier was out of this world good! They have bags of mini financiers to grab on the go, but I was short on time. 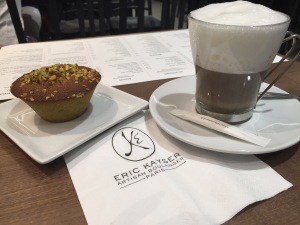 A metro ride, shuttle ride, and train ride later we were at the Versailles palace! Since I had a light breakfast I grabbed a sandwich by the ticket station before heading in. An Italian beef carpaccio sandwich for 5 euros? Yes.

The palace is gorgeous, but man is it packed! This is also a high time for tourists. In the early afternoon, the wait to get inside of the palace is 2 hours. Instead, start at the gardens (to the right) and head back to the palace around 3 o clock, by then the crowd has dispersed. 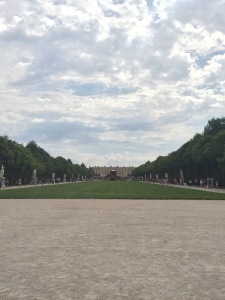 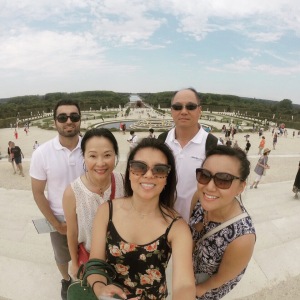 The gardens are stunning! Tons of fountains, mazes, and statues decorate the outdoors. If you walk all the way down, you can rent canoes and mosey down the big pond.

Inside of the palace, you’ll see the most ridiculous hallway:

Tons of ornate chandeliers hang from the ceiling, and the rooms are all lined with gold and intricate paintings. 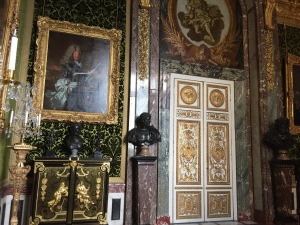 We returned home around 5, took some much needed showers, and went to a nice dinner at L’Atelier du Marché. Their seafood is especially good here, so for our main courses we all ordered either scallops or cod. To start, I had the housemade foie gras. They give a much larger portion here than they do in the states! It was creamy and decadent, in true Paris fashion.

I also had my first escargot! And I loved it. It’s not rubbery or slimey like I expected, and they’re baked with butter and parsley. It’s like eating a portobello mushroom. 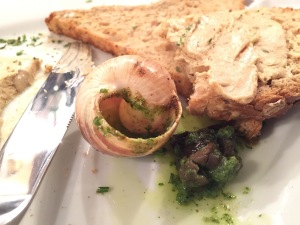 The cod was fantastic. Perfectly cooked, and served with a simple olive oil/onion/tomato sauce, and the creamiest mashed potatoes. 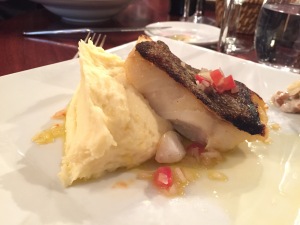 After dinner, we all went out to a nightclub called Le Duplex. If you’re from the states and think you party hard, think again. We got there at 12:15 AM and it was super empty–apparently that is considered early. Shots are 2 for 1 until 1 AM! The club started to pick up around 1, and by 2 we were taking over the dance floor. In addition to EDM, they played American hip hop and a ton of good reggae. The interior is swanky, and very spacious. We had such a good time I forgot to take any pictures, so you’ll just have to take my word for it 😉

We stumbled home (and by stumble, I mean we took a cab) at 4 am, and I passed out in my eyeliner. Keeping it classy as always.