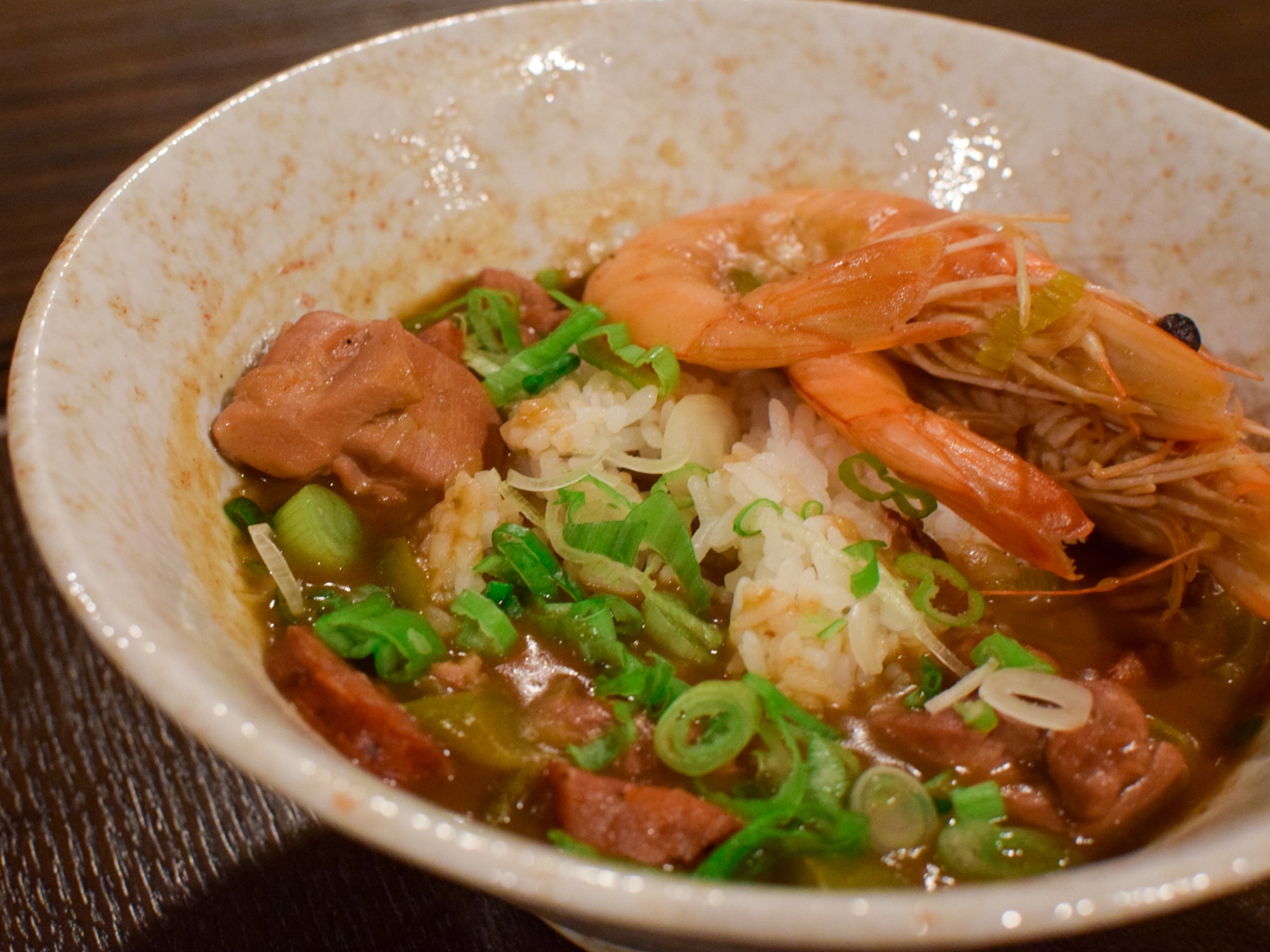 Whenever I’m feeding people, I find it easiest to just cook a huge pot of food. You stretch your dollar, throw a bunch of stuff in a big dutch oven, let it hang out for a couple hours, and have enough to feed an army. I’ve made this gumbo recipe countless times now, and get compliments each time I make it. It sounds daunting, but it’s not! I’ll take you through it step by step.

Chop your bell pepper, onion, and celery (the holy trinity, in Southern cooking). They will all be going into the pot at the same time, so you can use a large cutting board to get through all three of those badboys.

On a different cutting board, cut the chicken breast into small chunks. I used two chicken breasts, because I have some frozen shrimp my roommate gave me from Seattle, but if you’re not using the extra shrimp, use three chicken breasts.

Heat the tablespoon of vegetable oil in a large pan, and add the chicken. Season lightly with salt and pepper. You don’t have to cook them all the way, we just want to get them so they’re not raw on the outside. This helps keep the texture of the chicken when we throw it into the pot with everything else.

Take your chicken out of the pan, and set aside with the chopped veggies. 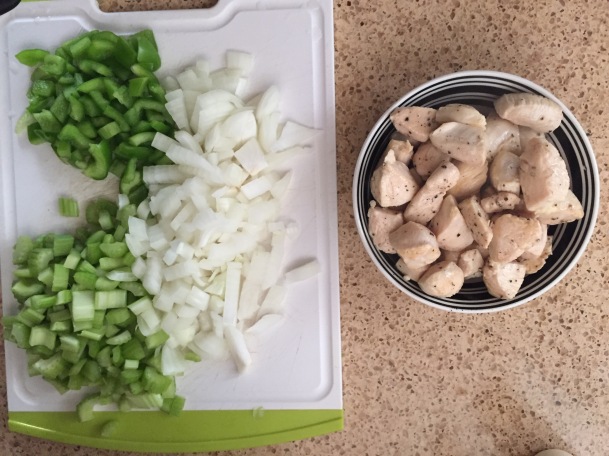 Next, the roux. This is the base for your gumbo, and it is super crucial you get it dark enough, but don’t burn it! Stay calm. I was worried the first time I did this but as long as you keep your heat low, you’ve got this. Heat the 1/2 cup of vegetable oil in a large dutch oven, and add the cup of flour. Whisk together, and it should be a super light barely-golden brown, like so: 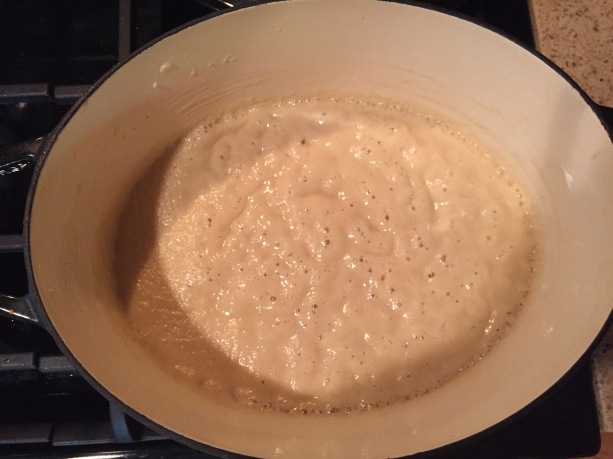 Start with your heat on medium, and keep whisking. You will notice as the flour starts to cook in the oil, it darkens. I hope your arm’s not sore, because you’re going to stand there and whisk that roux for a good 20 minutes. That is not a typo. You need to whisk that thing over medium to low heat for 20 minutes. This is the most time consuming and daunting part of this recipe, so stick to it! You’ll notice it turn a nice golden brown, like a graham cracker: 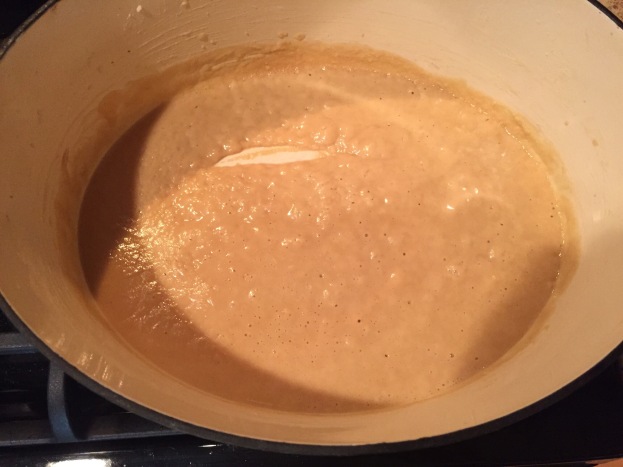 It’s not done though. Keep going. If you start to smell or notice it burn, immediately turn the heat off and keep whisking. 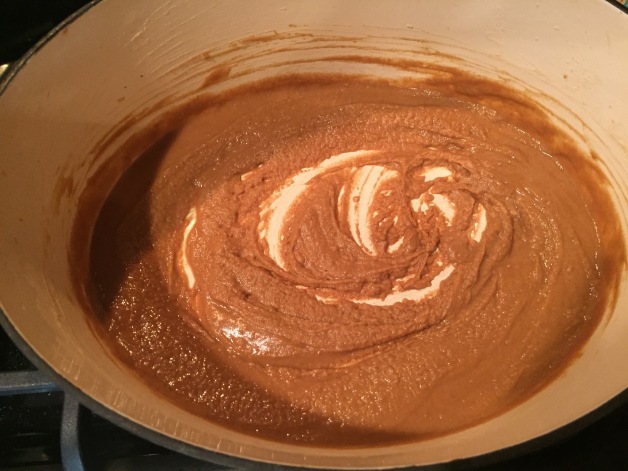 The movement keeps the heat evenly distributed and will keep your roux from burning. By the time you’re done, it should be the color of chocolate:

Next, add your chopped veggies to the pot and mix with the roux. Keep stirring until the veggies start to soften and release some moisture, just about five minutes.

Once that’s done, add your stock. I like to add it one cup at a time and mix, to let all the flavors incorporate. 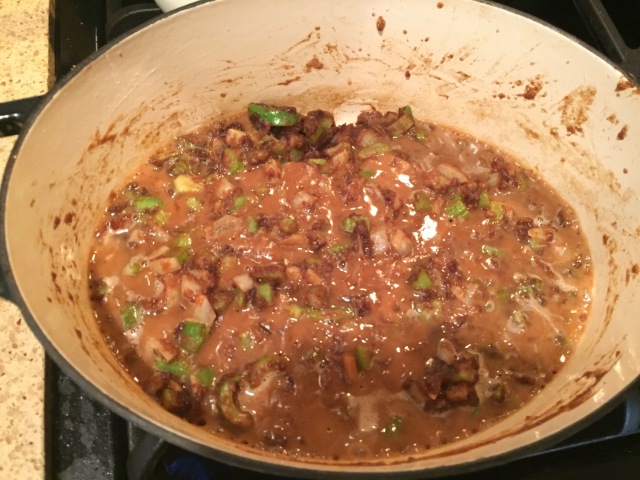 Then add the previously kindof cooked chicken, 3 bay leaves, cayenne pepper, and creole seasoning. Give it all a good stir, bring up to a boil…

And then cover with a lid, turn the heat down to medium-low, and let it simmer for 1 hour. In the meantime, cook some rice, and clean up your kitchen. Stir the pot every once in awhile, and bask in how gorgeous it looks as it starts to come together: 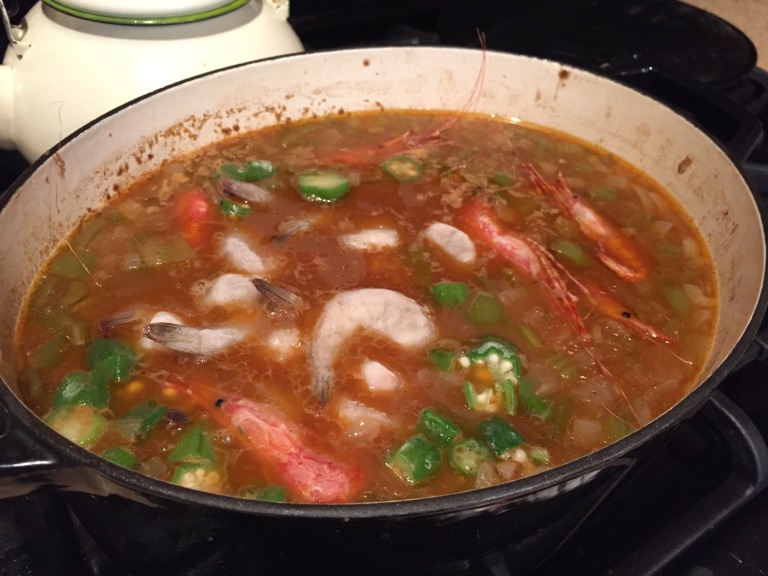 Finally, remove the bay leaves, add the file powder (it’s a thickener), stir, and serve the gumbo in a bowl ladled over rice.